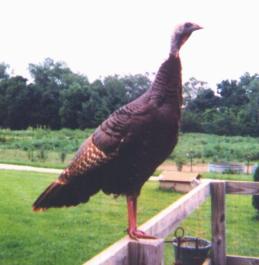 She was truly the Barn Queen, but we just called her the turkey.

Her true blue blood ancestral line could be traced back to a famous American Bronze dynasty.

For some months she ate and perched with the domestic hens on the barn loft but, come the Spring time of the year, she was moved into the empty dairy. There she lived in splendid isolation, laid her eggs and hatched out her royal brood. Each speckled egg was treated like a nugget of pure gold and, for ultimate protection, the eggs were buried in a deep earthen ware crock of Indian meal. The turkey herself was nurtured with the care and attention befitting a queen of her stature. Her nest was hand-woven out of hay and straw and the outer rim was reinforced with black sods of turf. The final structure would surpass the work of a skilled stone-mason.

The eggs were then retrieved from the dunes of yellow meal and ceremoniously placed under her ladyship.

After four weeks, the prayers were usually answered and it was then time to buy the pin head oat meal.

Unlike the riffraff hens of doubtful pedigree, the turkey dowager never grubbed in the gutter. Instead, she, and her brood, went on safari through the wild iris valley.

One evening, she forgot to come home. Her latent instinct had surfaced and she had gone to ground. A search party was quickly formed. With military precision, and the accuracy of a fine comb, the one acre of wild iris was searched from the big bush down to the river bank. Fog drifted in over the low land and threatened to engulf us all. The friendly surroundings of the day suddenly took on a menacing and distorted appearance. Fear pervaded the atmosphere and heightened the imagination. The old stories of the nearby ring fort, with its lone tree, might come true. Before breaking point was reached, the turkey was found and the valley was at peace and real again. No doubt, the fox cried that night.

In July, when the second cow calved, the royalty was moved out of the dairy and into the barn where a suitable perch was made. From now until December, the turkeys were stallfed. In every way, they were encouraged with potatoes, meal and milk to commit gluttony. Eventually they developed barrel-chests that any pugilist might envy.

Turkey never appeared on a country house menu, not even the one drowned in the barrel. Towns people, with bells on their doors and willow-pattern plates, feasted on this royal delicacy.

One Saturday morning in December, the curtain went up on the last scene of the turkey drama. The kitchen fire was bright and thick slices of home cured bacon were fried on the pan by the open fire. There was an air of "eat and be merry" for tonight we'll have money and three new records for the gramophone.

Horse and donkey carts, full of turkeys, lined the fowl market in the town of Boyle. All along the military wall these dumb animals stood in silent vigil as they bowed their heads in sorrow. The royal birds, packed on the carts as tightly as sardines in a tin, were now reduced to pounds, shillings and pence as they lay helplessly bound on a mattress of straw.

Men selling turkeys were forgiven on the assumption that their wives were delicate. Gra mo Croi country women turned ruthless in their selling, motivated, no doubt, by their memories of wrestling with big black pots of potatoes. Priest or Parson, friend or foe, got no bargain on big market day.

In the market the tout was busy creating panic and confusion in the theory of supply and demand. With hawk-like eyes he could pick out birds suffering from the effects of infantile rickets. He never failed to spot a dethroned barn queen after her five years of royal reign. The promise of a prepaid pint in the "Beehive" bar helped to dim his vision.

On the fowl market, Maggie was like the proverbial lamb amongst wolves. Her big mistake was in ignoring the warning "buy from friends" and "beware of the sharks". Maggie was a low sized vocal woman who worked as a paid housekeeper in the kitchen of a combined shop and bar. Like most people, she thought she knew the answers to all of life's questions. The two additional pounds in her pocket reinforced her confidence and gave her the air of new-found wealth. She could not resist the challenge of the open market. Each cartload of turkeys was dismissed as too expensive. At last, she met the wise woman from Mullaghroe who sold her a bargain. As Maggie made her grand exit from the market she was assured that after eating a leg of that fine bird she would feel like dancing the "turkey trot".

On Christmas day, Maggie learned that fine feathers don't always mean fine birds. All the coal in Arigna would not soften that turkey's hide and a bushman saw could not carve her carcass.

The wise woman had sold a barn queen.