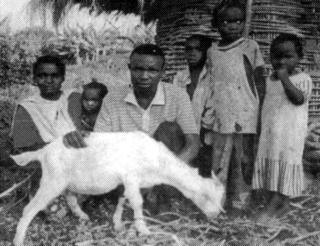 Some time ago a flyer came through our letter box. It said, "your goat can fly", On further perusal I found out it came from "Bothar" in County Limerick. "Bothar" is the lrish Third World Development Agency which provides poverty stricken families with the means to solve their problems permanently. They do this by giving the family an in-calf dairy heifer or dairy goat. A dairy goat and air fare costs £250.

I decided to take the bull by the horns or should I say the goat and I started collecting money from my parents, aunts, uncles, cousins and friends. In no time at all I reached my target of £250. Being a Killaraght man l choose the name "Attracta" for the goat in honour of our local saint. "Attracta" is now in her new home in Tanzania. A spin off from my project resulted in my aunt May and her friends in the "Silver Threads" Club in Celbridge County Kildare collecting enough money to send a dairy heifer to another family in need.

Perhaps this story will inspire some readers to send a "Living Gift" to a family in the Third World.

And this story did inspire readers as the people of Killaraght/Cloonloo and surrounding areas collected EUR5,400, and you can read all about this in the article from the Roscommon Herald. You can support Bothar's work in the developing world. More information at http://www.bothar.org/